Nepali Film Industry – Past and Present

Nepal does not have a very long film history, but the industry has its own place in the cultural heritage of the country. Most Nepali films are inspired by Indian movie industry and use Bollywood-style songs and narrative, and are shot on 16-millimeter film. Kathmandu is the center of the Nepali-language film industry, also known as Kollywood (or Kaliwood as an alternate spelling) within Nepal. 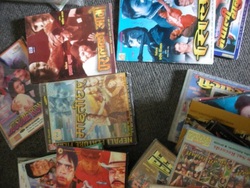 The first Nepali movie to be shot was D. B. Pariyar’s Satya Harishchandra that marked the beginning of Nepali films. It was produced from Kolkata, India, and was released on September 14, 1951. The first film produced in Nepal was Aama, and it was released on October 7, 1964. It was produced by the Information Department of His Majesty’s Government of Nepal (now Government of Nepal) and directed by Hira Singh Khatri and the lead actors were Shiva Sankar Manandhar and Bhuwan Thapa, who are regarded as the first actors in the history of the Nepali film industry. The first film to be produced under a private banner was Maitighar, which was released at the end of 1966 by Sumonanjali Films Pvt. Ltd. Although it was a Nepali movie, it had many Indians contributing toward the making of the film. Mala Sinha had the lead role, along with C P Lohani. It had special appearances ofSunil Dutt and comedian Rajendra Nath. The film was directed by B S Thapa and music scored by Jaidev, a veteran music maestro, it had Lata Mangeshkar, Asha Bhosle, Usha Mangeshkar and Manna Dey for the playback-singing along with the household names of Nepali music, like Narayan Gopal, Prem Dhoj Pradhan, C P Lohani, and Aruna Lama.

Then the government established the Royal Nepal Film Corporation in 1971. Mann Ko Bandh was the first film produced by the Corporation. Prakesh Thapa was the director of the film. Nati Kaji and Shiva Shankar were the music composers of the songs. Amber Gurung scored the background music. The film premiered in 1973 in Kathmandu. Mann Ko Bandh was followed by Kumari in 1977, Sindoor in 1980, and Jeevan Rekha in series. The success of these films opened up avenue for private parties to enter into filmmaking as industrial endeavor.

After the 1980s, some relatively more creative films were made and they became successful too. Thus, filmmaking started to appear a little more viable profession and the number of productions increased a bit. After the introduction of private companies in the Nepali film industry, the time came when more films were being made and they were much more accepted by Nepali audiences. Some popular films such as Samjhana, Lahure, Basudev, Saino, Koseli and Kusume Rumal were released between 1984 and 1993. The leading actors of those times were Bhuwan KC and Tripti Nadakar who were dubbed the “golden couple” of the Nepali film industry because of their on-screen chemistry. In the later years of the decade, Rajesh Hamal and Karishma Manandhar ruled the silver screen with their perfect chemistry.

After the restoration of the Democracy in 1990, the film industry began to grow rapidly. The number of productions increased. Within a period of three years, some 140 films were made. Distribution started to develop. Market share in the existing market increased and the market itself expanded. The number of cinema halls increased to more than 300. Nepali filmmakers became optimistic of replacing Hindi films, which had dominated the Nepali market, by Nepali films.

The start of the downfall of the Nepali film industry was the result of the Maoists revolution. In the era of war and conflict, fewer films were made with low budget and even lower performance, which resulted in even smaller audiences. In the later years of the conflict, the production and release of Nepali films had come to a standstill with many actors and filmmakers leaving the country in search of work because there were no films being made.

However, during the 1990s, some filmmakers, mostly with non-fiction base, started championing for a new kind of cinema. Rather than copying the Bollywood movies, they demanded indigenous and more realistic storylines for the movies. They made some historic movies like Balidan and Seema Rekha which received some critical acclaim at home and some international recognition. Later the Film Development Board (FDB) was established by the Government of Nepal according to the existed Motion Picture Act amended on 20th November 1991.

By 2006, with Maoists coming into mainstream politics, the Nepali film industry started to develop again. Now, more and more films are being made and released. The production companies and those in the industry are enthusiastic about the country’s new situation. Also the quality of the films being produced is improving, however, in comparison to Bollywood, it still lags far behind and the competition is tuff with maximum youths preferring Bollywood and Hollywood to Kollyhood.

Also, most of the Nepali films of new generation have the same storyline that was used in Bollyhood during 1990s and 2000. Actresses are either shown glamorous or a simple village girl. Such story still prevails in mainstream Nepali movies. We could see the movie posters pasted on the wall of the streets where the heroines are either in shorts or are crying their eyes out. Although few new generation directors are trying to display a different storyline and give a new look to the film industry, the maximum audience of the Nepali Film industry are those who prefer the traditional pattern and relate themselves to the movies that shows simple village life. That is why the directors often hesitate to take risk making movies with different taste and storyline.

New generation movie makers however, have come up to make sensible cinema with entertainment rather than Bollywood inspired socio-actions. Kagbeni, Sano Sansar, Mero Euta Sathi Cha, First Love, Kohi Mero, etc are some of the examples of quality cinema in terms of presentation, performance, story and technical superiority.

Thus, the Nepali cinema still has not been able to come far away from where it started, in terms of the storyline. However, keeping in mind the interest and choices of younger crowds and to attract their attention and interest towards the industry some new generation directors have been experimenting with the story of the movie. And, also the involvement of the skilled and professional actors, directors and the crew in the film has resulted in the improvement in the quality and the story of the films. We could say that, at present, the Nepali Cinema is catering to both kinds of its audience – old and new.