Karna Das is one of the most popular Nepali singers singing the songs of Nepali Aadhunik (modern) genre. Born on 24 November, 1974 in Pokhara, his birth name is Karna Das Pariyar. He started his singing career in 1997 with Jindagi ko ke bhasora as his first song. The song was one of the most popular songs of the time. He was also the lead singer of the Nepali band Madhyanha (meaning ‘middle’). 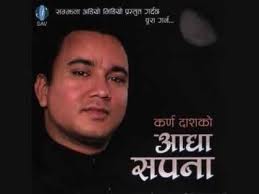 He completed his high school education in the year 1993 and joined college for studying economics. Born in the city of lakes, Pokhara, he has completed IA level education. Also a piano player, he takes Elton Jones, Richard Michael, Lata Mangeshkar, Jagjit Sing and Narayan Gopal as his inspiration. Singing mostly heart touching and emotional songs, he likes to perform in front of a large audience. His songs usually have a touch of sadness in it and the sadness in the songs have become his songs’ identity. He is not only a singer but is also a musician, songwriter and record producer.

He has given many concerts within and outside the country and his concerts not only are in groups but he also gives solo performances. Also, Karna Das Night has been organized many times, the nights dedicated solely to him and his soothing music. The man behind the songs like Thula Thula Mahal Hoina, Timro Mero Sambandhako, Puranu Dunga, etc. his songs are able to leave a mark on the listeners. He has released many albums like Madhyanha-1 (1997), Madhyanha-2 (1998), Madhyanha-3 (2001), Byerthai Feri, Purano Dunga (2003), Adha Sapana (2005) and Preer (2007).