The Janaki Mandir in Janakpur

The beautiful Janaki Mandir is a Hindu temple at the heart of Janakpur. Fully built in bright white, the temple is an example of perfect artistry. Constructed in an area of 4,860 sq. feet in a mixed style of Islamic and Rajput domes, the temple is 50 meters high. It is a three storied structure made entirely of stone and marble. All its 60 rooms are decorated with colored glass, engravings and paintings, with beautiful lattice windows and turrets. 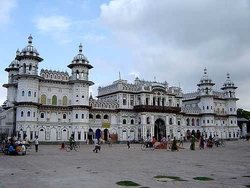 The temple was built in dedication to Goddess Sita. In 1657, a golden statue of the Goddess Sita was found at the very spot, and Goddess Sita is also said to have lived there. The temple stands on the exact spot where the statue was found.

Goddess Sita was born to the King Janak of the Mithila Kingdom, and was later married to the Lord Rama of Ayodhya, according to the Ramayana. The reference of the town in the holy scripture brings thousands of visitors every year from Nepal and India to this ancient temple.

The temple is popularly known as the Naulakha Mandir (meaning Nine Lakhs). The cost for the construction of the temple was about the same amount of money: Rupees Nine Lakhs or Nine Hundred Thousands and hence the name. Queen Vrisha Bhanu – of the Indian state of Tikamgarhm built the temple in 1910.

Thousands of pilgrims visit the temple during November and December for Vivah Panchami, the town’s major annual festival, when the marriage of Sita and Rama is celebrated with various re-enactments. It is an equally popular time too for modern day weddings.