On the way to Indrachowk from Ason, to your right, lay an image of Buddha carved beautifully on the stone pillar in the place called Machhendra Bahal, also known as Jana Bahal. The large pagoda style temple past the gate is dedicated to the Seto (white) Machhendranath, the god of rain in the Hindu religion. The god is recognized as an aspect of Avalokiteshwar to the Buddhist and once a year, his image is carried around in a chariot throughout old Kathmandu and this festival, known as Seto Machhendranath Jatra, taking place during spring lasts for four days.

As the idols have been stolen from temples around the valley, the temple of Seto Machhendranath, however, is enclosed with iron grills to prevent theft. The temple whose walls are covered in glided images and has a beautiful tympanum, it is visited by number of devotees who are seen making rounds, burning incense and oil lamps and paying homage at the inner sanctum throughout the day, despite the time. The courtyard of the temple consists of a large number of pigeons that are constantly fed corn and the pagoda is surrounded by residential buildings with shops on the ground floor. Although you get in through a crowded and noisy bazaar of Ason and Indrachowk, the inside of the temple is quiet and peaceful. 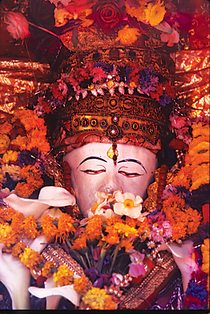 The temple is believed to have been established in the 10th Cent. C.E. and it is said that at one time, invaders from western Nepal had taken the image as a prize of war. However, they had abandoned it at the Kali Gandaki basin for some reason, which was later returned to Kathmandu when this king’s dynasty was plagued by disease as they held the image responsible for it. It remained buried for years until it was rediscovered during the time of Yaksha Malla and it was then that the present shrine for the god was built.

There are many monuments from medieval times including a European looking sculpture (probably built at a later date) within the courtyard of the temple. The devotees worship the images and idols in the courtyard along with this structure by burning incense and putting vermillion powder on it.

The idol of the Seto Machhendranath, as one can guess by the name, is painted white and is taken out in a chariot procession once a year. The image of the god is bathed and brought from the temple to the place where the chariot is built before the festival begins. It is taken from one place to another where it is to be kept for the day and at every stop, devotees pay homage and lay offerings to the god residing within the chariot. Usually a priest rides on the chariot distributing Prasad to those who surround it and a large number of Newar followers are seen pulling the chariot from place to place with the aid of large ropes. The chariot built at Durbar Marg is pulled through Ason where it is kept for the day and from here, it is pulled to the Kathmandu Durbar Square.